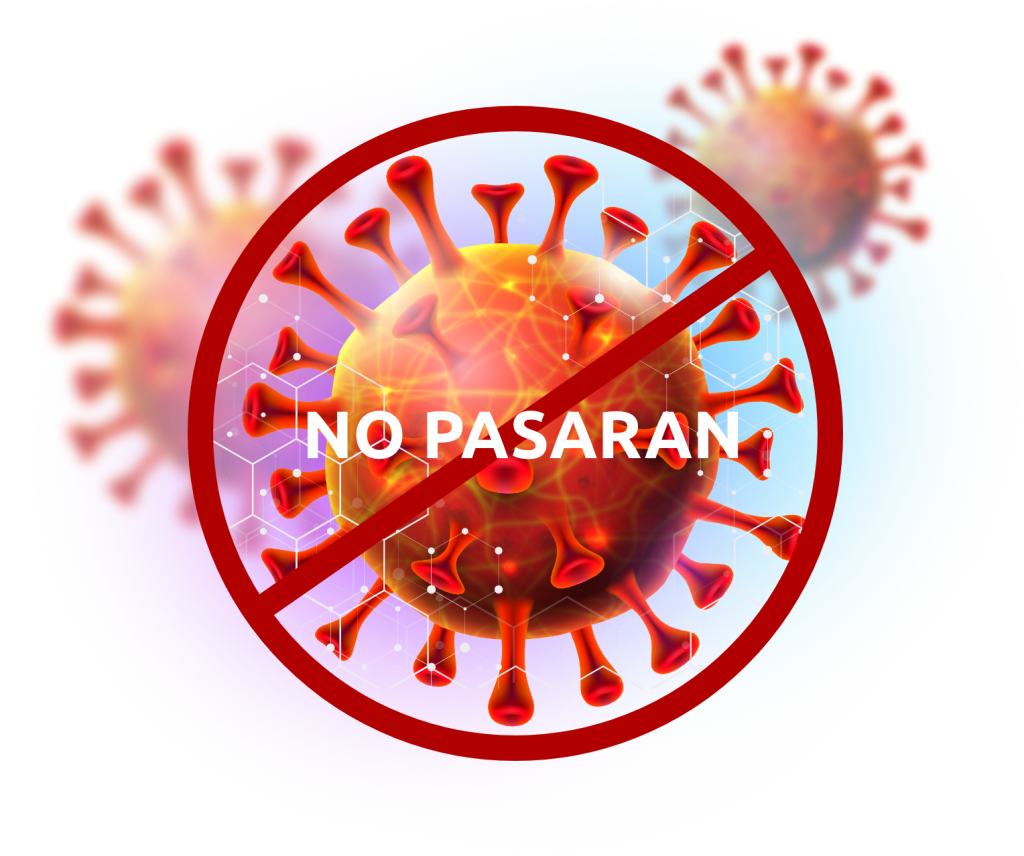 Doctors, like politicians, enjoy absolute amnesty ‒ untouchability, or something. This is due to the supply of children for organs abroad to immoral wealthy sick from riotous life (in addition to the sexual and other exploitation of children before death, of course), stem cells for actors and politicians (not all!; vegans have natural beauty); vaccination (doctors receive bonuses for more than 95% of children vaccinated). There are no ends in such a mutual responsibility in crimes, and children ‒ are not even a commodity, but a consumable, a product of conception. Those people whose child died on the operating table or became disabled from vaccinations, as well as those who were kidnapped by special services with "blind" cameras, know not by hearsay what this is about. And if a person asks for help, they will be intimidated by juvenile justice and make it clear that the parents may lose another child or even freedom. So, all responsibility is attributed to the parents: this concerns the "food" products and the consequences of them, the documents signed by doctors for medical intervention in the child's body, and many others. I know for certain about pedophilia in the highest echelons of "power" and how they treat children without heart. It is extremely naive to believe that this will change for the better as long as there is exploitation of animals and parents are not aware of what is really happening. In the same vein, in unison with the installation of 5G towers, the coronavirus (COVID-19) crawled out like a snake into the arena of a bloody chessboard, completely suddenly and globally. But in this section, we will bring to light the culprits in this conspiracy and cover all aspects of the coronavirus lie. Yes, there is a pandemic ‒ a pandemic of widespread belief in false statements and the limitations associated with them.

⊙ Coronavirus (COVID-19) as a social phenomenon ‒ is a military operation to test the reaction of the population of various countries to the threat of a pandemic spreading without concrete evidence of its existence and independent examinations.
﻿

I INVITE EVERYONE TO PARTICIPATE
IN THE INVESTIGATION AND JOURNALISM!
If you have materials and valuable
information on this topic,
please let me know through the form
at the bottom of the page. Child.
· InfoCenter of the «Happiness in Freedom» ·

🦠 Purpose of the coronavirus lie 🦠

The world government pursues the following goals of the spread of the coronavirus, it is more correct to tell lies about COVID-19:

Psychological pressure (hence ‒ the "press") {Several billion people, especially representatives of law enforcement agencies, in just a few weeks in 2020 years literally "bent cancer" to obediently fulfill criminal instructions based on lies (for which those who started all this should be condemned at the international level, but this will not happen for obvious reasons ‒ the system protects itself, but not moral families). Because of this, many people broke down mentally, having lost everything. If before that they somehow survived at the expense of their own business, now this piece of prosperity has simply been stolen by the corrupt government in almost every country (except for the Republic of Belarus). They humiliate people, justifying themselves by the fact that they eat meat. It is fair, but those who think of themselves as executioners, besides meat-eating, rape children in the anus (for details, see the speeches of David Icke [«The Lion Sleeps No More». England, London, 2010.]) and have no right to judge anyone ("judges" are the victims)};

Shrinking the planet's population {The world government cannot cope with the diverse and growing self-aware population of the planet, since the manipulators themselves ‒ are a handful of psychopaths};

Dissociation of people for their vulnerability {When the effect of 5G on lung tissue became obvious (immunity decreased, and people began to literally choke like birds that fell dead during the military tests of 5G installations ‒ what a coincidence ‒ in those regions that were declared as foci of coronavirus infection), the government needed to prevent a real wave of disagreement with the introduction of a new wavelength range, and they quickly (albeit according to a pre-planned scenario) began to spin outright and criminal lies about COVID-19};

Compulsory vaccination in full swing {This time it is already such an explosive snake cocktail, which will contain special nanochips (for connecting a human-computer to control satellites) and other suppressing immune (and therefore psychological) natural human defenses; first of all, vaccinations of a new type are aimed at the child's body, which has been planted for a very long time to "communicate" with mobile devices transmitting a signal through parents putting a mobile phone in their hands so that he does not distract the baby (why do you give birth to them then, I ask, if you can't take the time or instead of looking for a new rag, search the Internet for information about the effect of smartphones on children's health?)};

Destruction of small and medium-sized businesses {Slaves should not have property and the ability to autonomously (and therefore independently) provide themselves with products and the results of their labor. The world behind the scenes wants in the near future to take control of the access of every person to foodstuffs, first of all, essential items};

Abolition of cash, ostensibly for "sterility" {Symbols and irradiation of banknotes have proven to be protective against infections over decades. Now it suddenly became a "problem". A separate topic ‒ is «Sberbank», which turned into «Sber» and came under state control in Russia (controlling stake) during this period (beginning of 2020 year). This is no coincidence! «Sber» becomes a platform for the government to implement plans for digital slavery};

Chipping through vaccinations and for payments {In an interview from 2020-05-03 for «LondonReal», David Icke spoke about a CIA agent which in the late 1990-s years recruited to the Agency (whose agency, asks) even if he refused by erasing his memory and placing a plastic bag (the so-called "patch") with a special liquid of golden color that supports life for 3 days ‒ and he will die if it is not changed. The bottom line is that manipulators want to make everyone their agents, breaking the will and recruiting into the ranks of the special services ‒ in fact, private armies of large bankers and government henchmen of the true culprits of the "bloody feast". New vaccinations will completely disfigure children if do not tell about the composition and this information is not conveyed to everyone who may be affected. The lie about coronavirus has catalyzed the digitalization process and the move away from cash. After the technology of payment via NFC from a mobile phone, the stage of implantation of microchips directly into the human tissue (namely, the right hand, forehead or back of the head) will begin. I note that nanochips are needed to block natural frequencies and susceptibility to controllers from 5G towers, and RFID (radio frequency identification) microchips ‒ to determine location, enhance modulations (total health control), and of course, in a public form for payments, funds for which can block any moment for disloyalty to the control system. Many organizations in various countries have already given up cash entirely}. 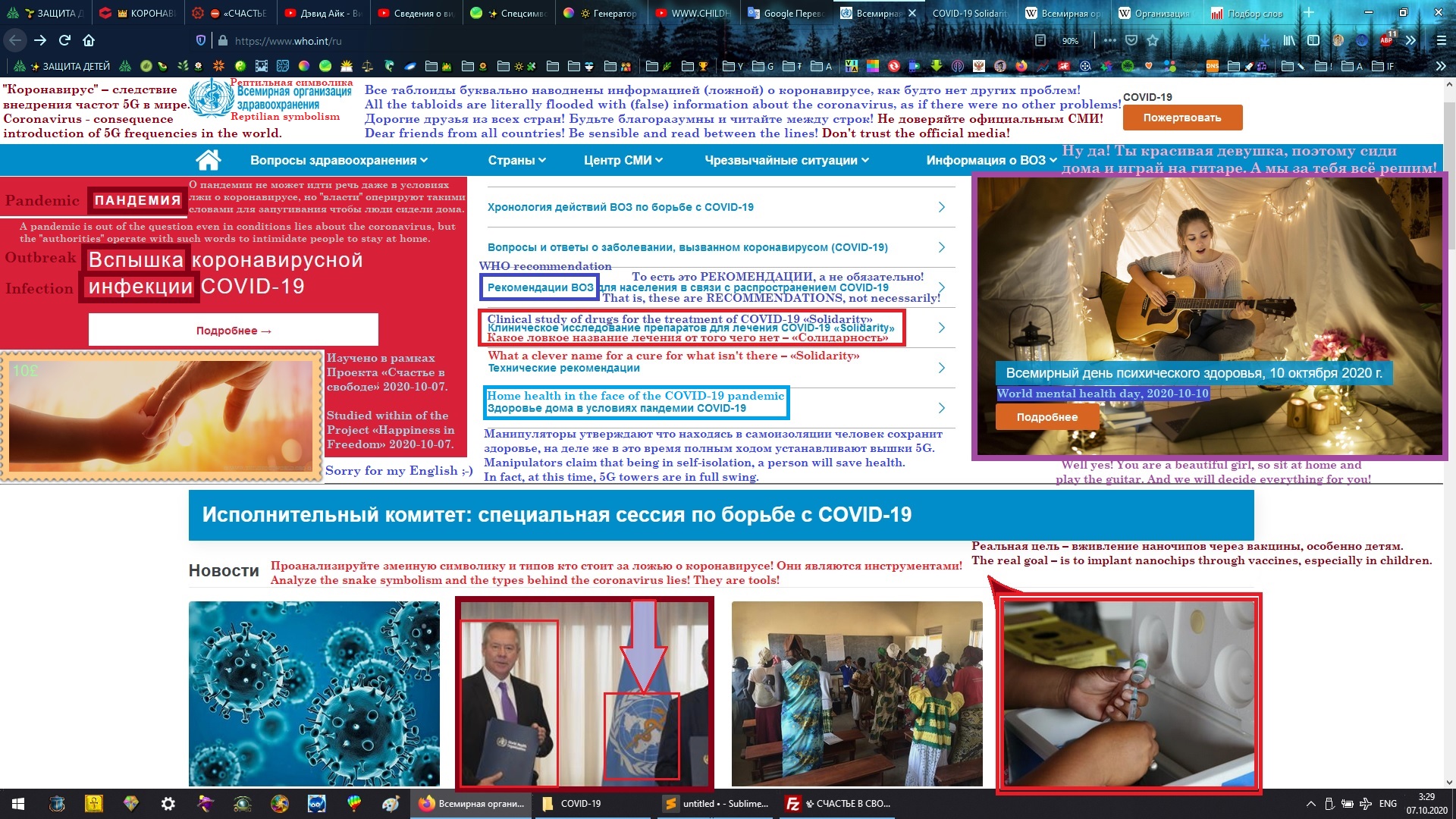 🔥 Large: 🐍 WHO website 🐍 🔥
The supposedly authoritative medical instructions of WHO [World Health Organization. Switzerland, Geneva, 1948.] were based on outright widespread lies both about the existence of the coronavirus (COVID-19) in general, and measures to "fight" it. But few people began to understand that WHO ‒ nothing more than a UN unit; therefore, like it has the right only to recommend to the governments of countries what to do in the event of a real (I repeat: real, not fake!) threat to the health of citizens. 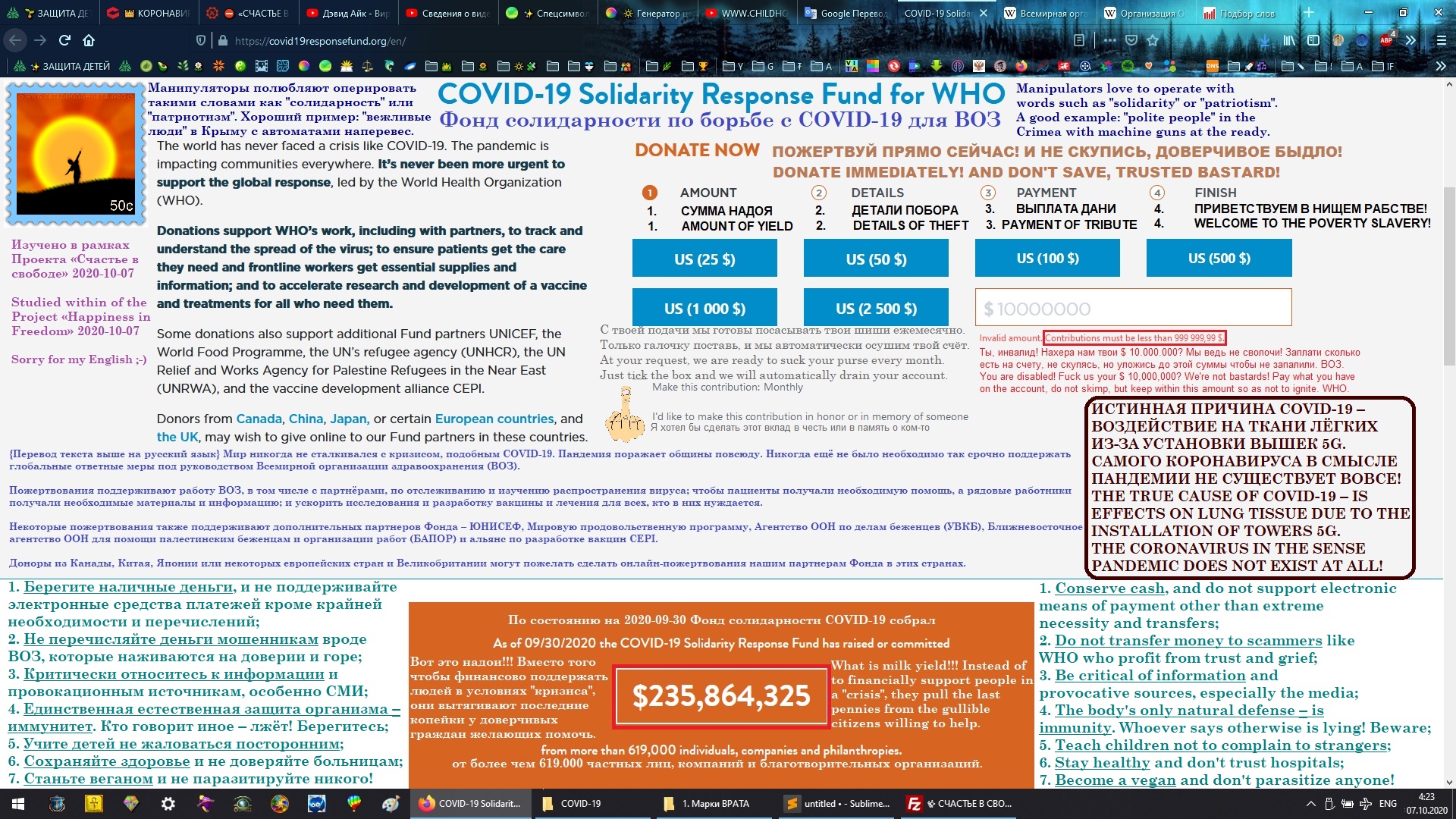 🔥 Large: 🐍 WHO collects fees 🐍 🔥
In fact, having played the role of a tabloid, the World Health Organization is spreading lies about COVID-19 and all the consequences associated with coronavirus while hiding the true cause of problems with the human lung system and a decrease in immunity ‒ the installation of 5G frequency band masts around the world during the period of self-isolation. Let me remind you that the reaction of people (and quite natural) to the installation of 5G towers at the very beginning was ‒ to burn them to hell! Such a violent reaction could not suit the manipulators, and it could confuse all their cards. A handful of moral monsters (there are no others) in real "power" are extremely small in number, and they are pathologically afraid of resistance. 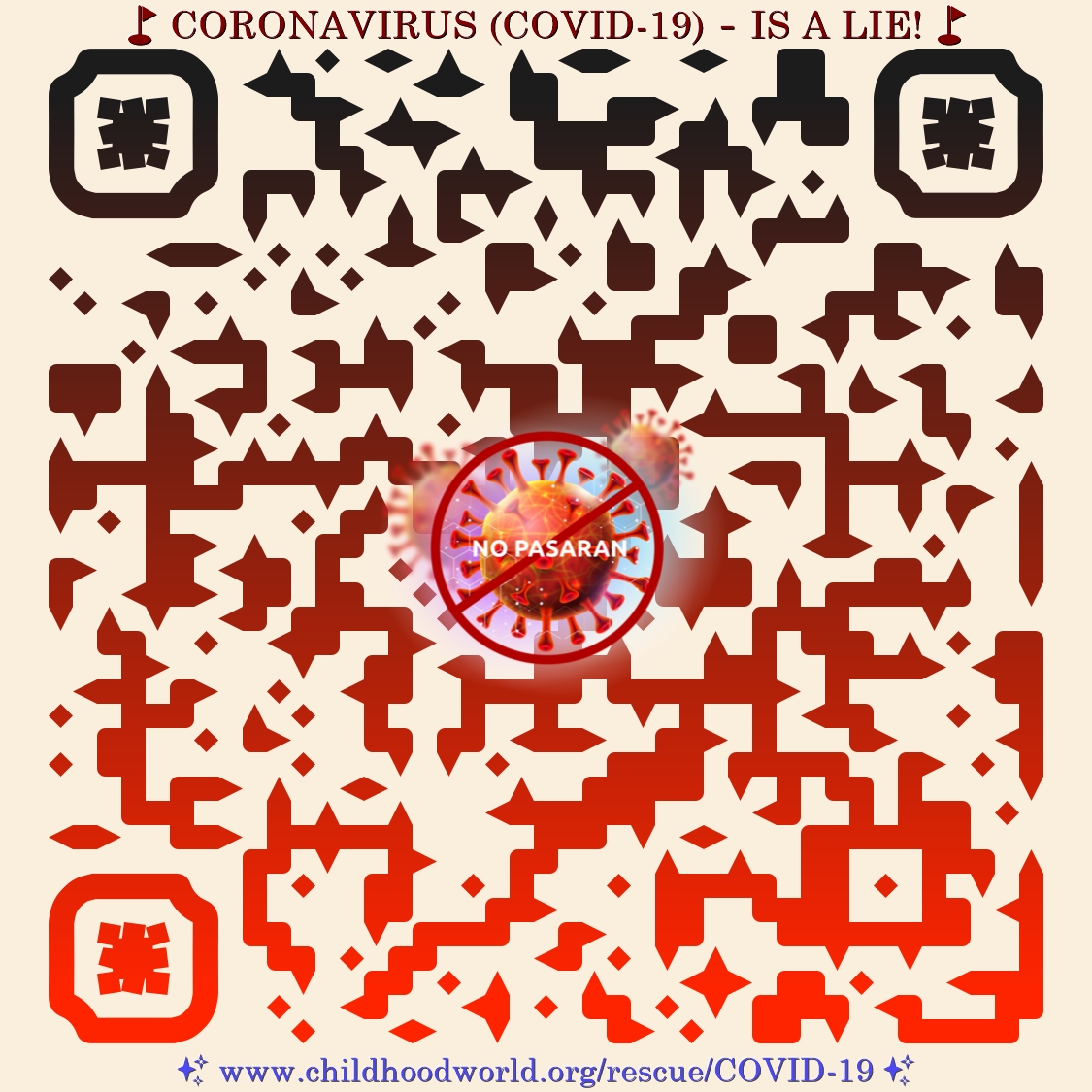